The Ionic Pro Turbo TA500 is a air purifier with no motors or moving parts. The TA500 does not have expensive filters to replace. Instead, it comes with three permanent blades. The blades collect dust, bacteria, pet dander, and other airborne particles. It also releases negative ions in the air to give the room a fresh smell.

A slight history on my air purifier experience: I had previously owned the Sharper Image Quadra Ionic air purifier. I got rid of it as fast as I could once I found out it was actually harmful for the human body. Sharper Image’s product was putting too many ions in the air. With that being said, I then switched to the Honeywell HFD-130 air purifier which used fans to move the air in the room, along with a permanent filter. I put four of these bad boys in my house, let them run on Medium or high 24/7 and I slowly watched my electric bill climb. They were also quite annoying because they made so much noise that you’d have to turn the TV up to hear over the fan. Eventually I ended up turning them all off and selling them one by one. I now have two Ionic Pro Turbo TA500 air purifiers. 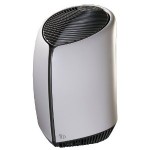 Out of all the air purifiers I have owned, the Ionic Pro TA500 is my favorite. I read reviews like crazy. Yes, I did see that some people were extremely satisfied or extremely dissatisfied. The main issue I read with most people was that their TA500 would make zapping noises. This simply means the product is doing its job and cleaning the air! It also means that the blades are getting dirty and you can clean them any time. I will admit, if you are sitting in total silence the zapping noise can be annoying. However, when I’m sleeping at night time, I always have a fan running. I like the soothing noise of the fan, so this easily masks the zapping noise. And it’s not like the zapping noise is loud! It’s actually pretty quiet. When I have the TV on downstairs, you cannot hear the Ionic Pro whatsoever. I really don’t know what everyone’s fuss is about.

You really do need to clean the Ionic Pro TA500 about every 5-7 days. It’s not hard to clean. You just take a damp cloth, wipe the blades down and make sure to let the blades dry completely before turning the air purifier back on. If you turn it back on before you let the blades dry, you can actually end up ruining the blades. I would say the total process takes less than a few minutes to complete. With that being said, if you continue to clean the purifier this way, you shouldn’t hear a constant zapping noise. I read this in other reviews, and I figured this was too small of a con to stop me from buying the air purifier.

Now, onto the ions. When I turned on the TA500 for the first time I could smell the ions right away! I missed this smell so much! When I switched from the Sharper Image to the Honeywell HFD-130, I loss the smell of ions since the Honeywell didn’t release them into the air. There are no reports that I came across stating the Ionic Pro TA500 released too many ions in the air to be harmful to the human body. Ionic Pro was probably careful not to make the same mistake as Sharper Image. In the end, Sharper Image ended up being sued and lost the battle. As of today, there are no more Sharper Image retail stores in America. The ions make the room smell so fresh. It reminds me of a spring morning right after the rain.

If you’re in the market for an ionic air purifier, I would highly recommend that Ionic Pro Turbo TA500. I’ve owned quite a few air purifiers, and so far this is my favorite. Compared to other air purifiers on the market, I would consider the Ionic Pro TA500 to be reasonably priced. I used a 20% off coupon for Bed Bath and Beyond to bring the price down. I bought each purifier on different days since the coupon only lets you take 20% off 1 item, not your whole order. I ended up getting two air purifiers for $154 each ($308 total, including tax).

Scream 4 – Lived Up to My Expectations