Cutting the Cord on Cable TV

Between Hulu Plus and Netflix on my XBOX 360, I can say I’ve officially cut the cable cord. There’s been a lot of talk about cutting cord recently. If I can recall, an author over at CNet even reported his experience on a day-to-day basis. Him and his wife were trying to buy a new car and needed to cut back where possible. They didn’t make it and eventually got their cable back with their DVR. Pretty sad.

A small majority of people have actually cut the cord. It’s definitely not like having cable and you just sit back and there’s a guide to flip through to see what’s on TV. It does require some work on your end. Comcast’s CEO, Brian Roberts, isn’t too worried about cord cutting. Brian said so far there’s been little impact.

I’ve been doing this for the past 2-3 months now. Yes, I said MONTHS! I’m not sure why I didn’t do this earlier. I’m saving at least $70 a month by not giving Comcast my money for TV. Now, I do have to be honest, I go a little further than just Netflix and Hulu. If the TV show is not on either of these networks, then I turn to BitTorrent to download my TV shows. I use a program such as Mezzmo or TVersity so I can stream the video files through my XBOX 360 onto my big screen. Mezzmo ended up setting me back like $30, but it seems to work a little better than TVersity.

Finally, after all of that. If I still have nothing to watch, I simply flip through the local channels. Something is always on after work such as Seinfeld, The Simpsons, Family Guy, Two and Half Men, etc.

I also have a TV upstairs in the bedroom and instead of buying another XBOX 360 to hook up (because they’re not cheap) I use a Roku box. It was only $79 and it supports Netflix and Hulu. In fact, if you’re looking to cut the cord and you don’t have an XBOX 360 then I would recommend picking up one of these Roku boxes. It actually supports more than just Netflix in Hulu.

If you haven’t heard by now, Amazon Prime members have access to Amazon’s streaming service. They just introduced it this year, so it’ll still be a while until it matches Netflix. The Roku box does support Amazon’s streaming service (and I am an Amazon Prime member). Since I’m a student, Amazon gave me access to their Prime program FREE for 1 year. I actually just got my renewal notice, and they’re going to give me another year for only $39 instead of the original $79/year price tag.

The Roku box also supports Pandora, YouTube, CNet, HGTV and a variety of other channels. If you’re looking to add channels to your Roku box, simply Google “Roku Private Channels” and you’ll find the code required to add the channel to your device.

The Roku box does not support streaming video files from your computer to your TV. So if you are looking to do this, you will need a media extender. I know DLink, Linksys, Netgear, and Western Digital all make media center devices. One of these will set you back $90 – $300  depending on where you buy it from. And of course, if you have an XBOX 360 like me, then you’re all set.

What do you think? Have you thought about cutting the cord before? Did you make it or go back to your old ways? Maybe in the future when I don’t have to worry about so many bills, I may eventually go back. For now, everything seems to be working just fine and I never run out of things to watch. At the very least, I’ve found more shows to watch because I’ll just turn something on to to play in the background while I sit on the couch with my laptop.

Here’s my setup in the living room. TV mounted on the wall with a floating glass shelf hanging below the TV with my XBOX 360 and other electronics placed on it. 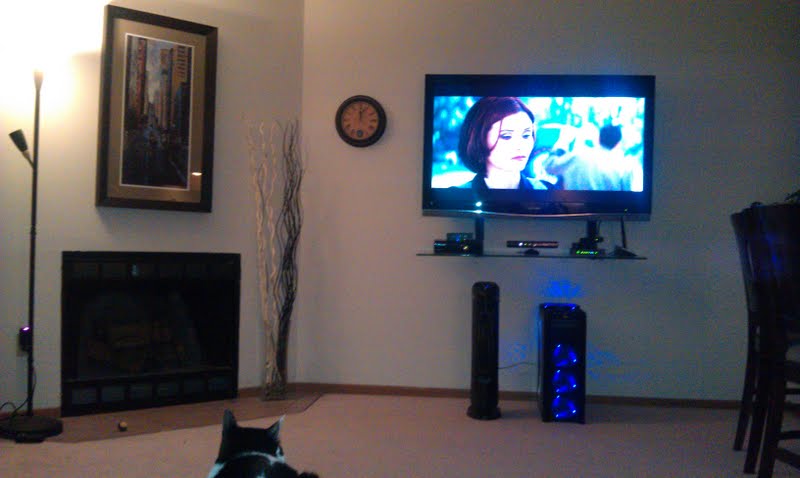