Build Your Own Windows Home Server

I was in the market for purchasing a Windows Home Server. What is Windows Home Server? WHS is your own home personal server that will backup your laptops and desktops you have in your household. If they ever crash, you can easily recover your files. Also, the server acts as a media storage server so all your computers can easily access the same files. If you’re like me, you setup the home server to stream movies and music to a media extender such as the Western Digital Live TV. The Western Digital picks up all my movies I have downloaded on the server and I’m easily able to stream them to my TV. Sound complicated? It’s really not.

Anyways, back to the building of Windows Home Server. At the end of 2010 HP announced it would no longer be building home servers. HP was one of Microsoft’s biggest partners in their Home Server product line. Now, just because HP dropped out, doesn’t mean you can’t still buy HP Home Servers. Those products are just going to be out-dated and running Microsoft’s first version of WHS, and NOT Windows Home Server 2011. At the time when I was looking for pre-built servers I saw quite a few HP servers on NewEgg.com for around $249 – $350 depending on rebates. Again, these were running the old version of WHS. I thought about it, and I figured I could make my own home server for cheap, dirt cheap.

If you don’t have experience building computers on your own, then I’m afraid this article will only help you out a little bit. When building a computer you really have to know motherboard and know how to plug the pins in correctly so when you press the power button on your tower, it’ll turn the computer on correctly. If you take a little time studying the manual that comes with a motherboard, it’ll tell you exactly what to do! We all have to start somewhere, right?

Before I go any further, I also have to admit that some products I did salvage from other computers. Example would be hard drives that I already owned. So items and pricing will not be listed below.

Now here is what I purchased back in November of 2011 to get my server up and running:

1. Thermaltake V3 mid tower computer case – This is a good size since I only needed to fit hard drives and the motherboard into the case. Newegg.com is selling this for $44. However, I got this from my local Micro Center for $27 after mail-in rebate.

2. MSI 760GM-P33 motherboard. This motherboard isn’t top of the line, but for a Windows Home Server it’ll do just fine. Supports up to 8GB DDR3 memory, and a dual-core AMD processor. NewEgg.com has this currently listed for $46.99. However, I was able to get an open-box item on their site for $35.

Products I already own and did not need to purchase for the server:

1. An external CD/DVD-ROM drive. I did not want to add an internal DVD-ROM drive since I have no need for an optical drive within a home server. You could even go as far to install the home server software directly from a USB jump drive.

2. Hard drives. I currently already own four 1.5TB hard drives. I used 1 of them to install the Windows Home Server. The other 3 hard drives I’m using as storage in a RAID configuration. This is where I store all my movies, pictures, music, and more.

With the new parts that I needed to purchase I only spent right around $300. Not bad for building my own server that is way better than an old HP Windows Home Server for the same price.

Windows Home Server 2011 fits into my home computing needs just perfect. I really like the fact that I have a server that runs tucked away in the house that doesn’t require much maintenance. No mouse, keyboard, or monitor is required. If you do need to access the server to give it a restart or install updates, you can login through Microsoft’s Remote Desktop. What does this allow you to do? You can use one of your main computer’s monitor and keyboard to control your server. This way I can be on the laptop downstairs, and login to the server upstairs to see what is going on.

Here are a few pictures of what my Windows Home Server looks like: 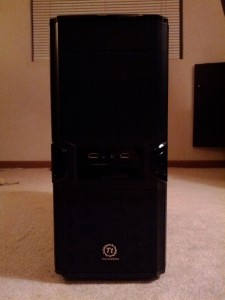 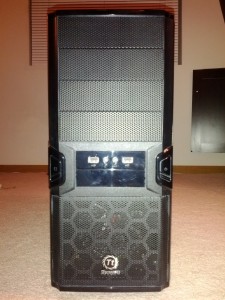 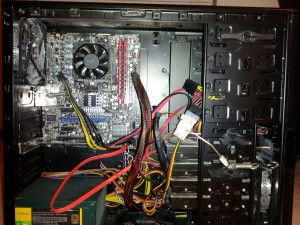